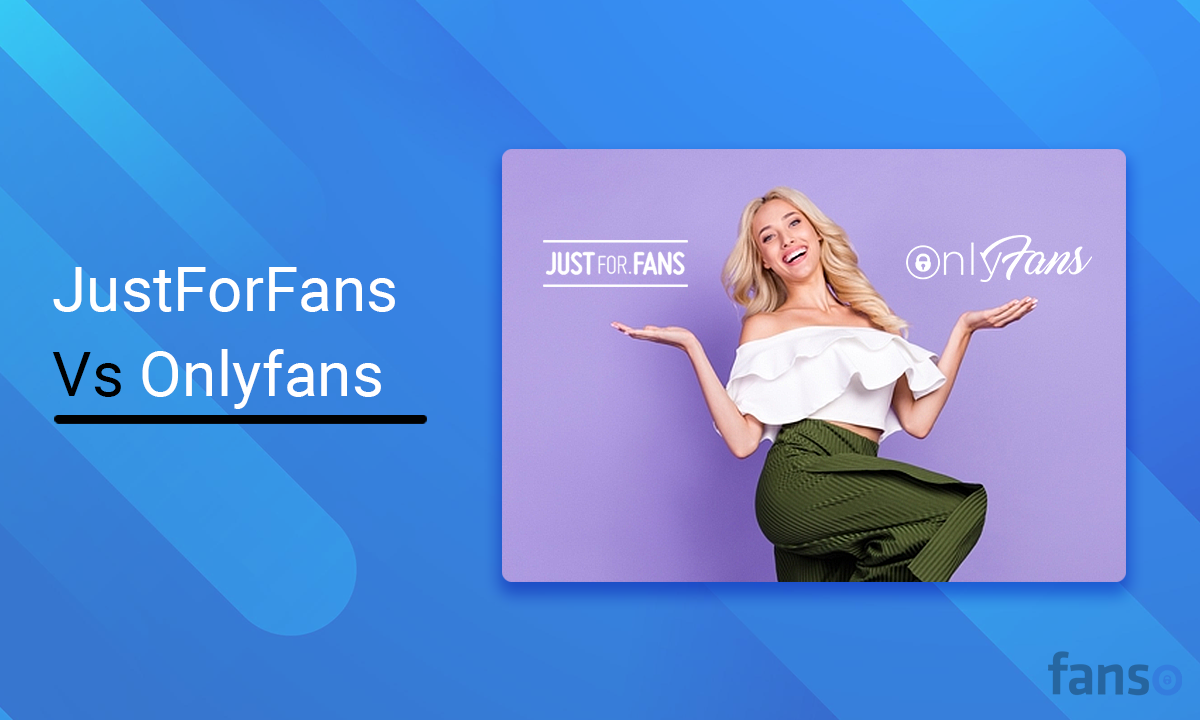 OnlyFans is not the only subscription-based content creation platform anymore! There are some serious competitions on the rise.

OnlyFans was launched back in 2016 and since then, it has constantly grown to become one of the go-to destinations when it comes to the adult creator marketplace. But now, with the advancement in technology and the potential the creator industry exhibits, there are more creator platforms on the rise.

In this article, we are going to see one such platform that is a direct growing competitor for OnlyFans. And it’s none other than JustFor.Fans (JFF).

We’ll be covering the various aspects of JustForFans and also a quick “vs” between JustFor.Fans and OnlyFans.

That’s the gist of the article. Let’s move on.

To start with, the platform comes with the tagline “The ultimate adult blogging platform and marketplace”.

JustFor.Fans, like OnlyFans is an adult subscription-based content creator platform that allows creators to connect with their fans and earn money. The platform was founded by Dominic Ford, a former male sex worker.

The key reason for JustFor.Fans creation was to provide models with a better platform that would allow them to engage with their subscribers, meet their demands and earn money from it. The look & feel and the functioning of the platform are similar to that of Tumblr and ManyVids. This facilitates easy navigation of the platform for both models & users which could significantly increase the usage.

This justifies the name of the platform! People who are into these types of kinks will definitely head on to the platform increasing the chances of earnings for creators.

That’s a quick overview of the OnlyFans alternative JustFor.Fans. Let’s look at how it works now.

How Does JustFor.Fans Work?

The working model of JustFor.Fans is simple and it doesn’t quite differ from other creator community platforms.

Creators upload their content on the platform and fans, on the other hand, have to pay a monthly subscription fee in order to view the content. The platform also allows creators to make money via several revenue-earning methods.

Like OnlyFans and Patreon, creators can set up a subscription membership plan and the cost can be somewhere from $4.99 to $14.99.

Earning Via Sexting: The platform allows creators to charge exclusively when they carry out a one-on-one sext chat with the platform audience or a subscriber.

Exclusive Videos & Pictures: Apart from subscriptions, models can make their photos & videos exclusive and charge for the same.

Instagram/Snapchat Access: In order to stay more connected and personalize the experience, fans can purchase exclusive access to the creators’ social media accounts.

Above mentioned are the ways via which creators on JustFor.Fans can make money.

The sign-up process for fans is quite easy. All they need is an email ID. As for creators, they should login via a Twitter account, upload a genuine ID proof and a W-9 form (for creators in the US).

As for the payments, bank transfers are available for U.S., Canada, Australia, U.K., and E.U. Creators from other countries should be making use of services like Paxum, Payoneer, or cryptocurrency.

The payment frequencies are weekly and monthly and the minimum threshold frequency is $20 (it seems the platform has lowered the amount from $50 to $20 due to the pandemic).

Models get to keep 80% of what they make across the platform on all sales. But models who are a part of the exclusive program get to keep 85% of revenue on transactions like media sales, SMS, tips and more.

JustFor.Fans Vs OnlyFans – A Quick Comparison

This is one of the main differences between the two adult creator community platforms. JustFor.Fans is an exclusive adult creator platform with kinks you can find on no other platform, even OnlyFans.

Whereas OnlyFans wasn’t meant to be an adult creator platform. It allows all kinds of creators and since the platform allows pornographic content and there was no real competitor at that time, OnlyFans slowly became recognized as an adult creator community platform.

Like we discussed on the above point, JustFor.Fans has far more exclusive categories that aren’t allowed on OnlyFans. This includes ageplay, incest roleplay, water sports, lactation and more. This makes JustFor.Fans a true adult subscription platform.

This is another great package that OnlyFans doesn’t offer. JustFor.Fans takes care of its adult workers by providing healthcare packages which they can choose from the site. They also get the mental support they need from the platform itself.

The Verdict – JustFor.Fans Vs OnlyFans

Like OnlyFans, JustFor.Fans also has a clean, easy-to-use interface. The payout percentage is the same for both the platforms – 80% but exclusive JustFor.Fans members get an 85% payout.

JFF has categories that OnlyFans doesn’t have and the platform offers a lot of revenue-earning methods just like OnlyFans.

So, the verdict is, that it comes down to which type of content you want to produce.

Even though JFF is not quite popular and is only in the growth phase, you can consider going for it if you are offering content in exclusive categories. Since the audience base here is exclusive and willing to pay for the content (because they won’t get it elsewhere), the earning potential isn’t going to be a question. Also, since JFF is solely an adult subscription platform, the chances of getting discovered and engaged with the audience are more when compared to OnlyFans!

You never know! JFF could be the next OnlyFans and it’d a great idea to have your presence on the platform when that happens!

Lately, a lot of fanclub websites are on the rise – Fanfix, BrandArmy  and now it’s JustFor.Fans. So, we thought we’d let you in on the steps to build your own fanclub website.

Fanso is an adult fanclub website script that lets you create platforms like OnlyFans, Cameo and JustFor.Fans on the go.

Fanso is white-label, highly customizable and you get 100% access to the source code. The platform is built using robust tech. With Fanso, you can create your own fan club website with ease!

In this article, we’ve seen what is JustFor.Fans, we’ve discussed about JustFor.Fans vs OnlyFans also saw how to create a fanclub website like JFF.

So, if you’re someone who is totally into adult content creation (especially the kinky ones), JustFor.Fans is the place to go. And as a creator, it doesn’t harm to have a presence on multiple platforms or build your own website!

What really matters is CONSISTENCY! Be consistent on whichever platform you choose to go with and you can witness results in real-time!